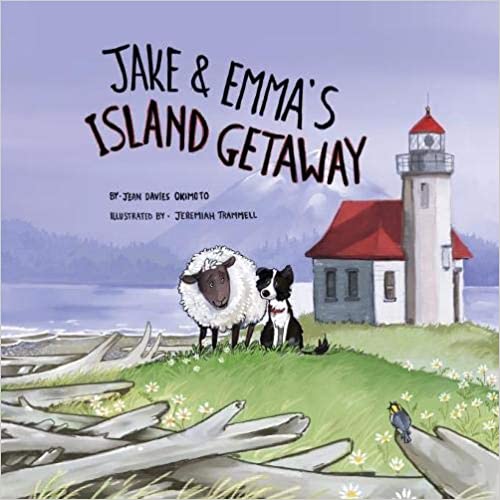 When Jake and Emma escape a Pacific Northwest sheepherding contest, little do they know they will find a place where they were always meant to be...

A warm, funny story that shows competition is not for everyone, Jake and Emma's Island Getaway celebrates the quirkiness and beauty of the Pacific Northwest and the timeless value of friendship. 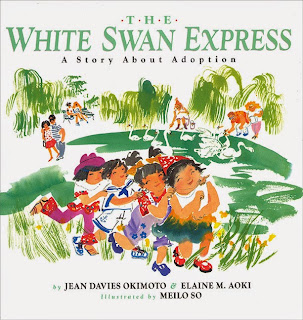 In China, the moon shines on four baby girls fast asleep in an orphanage. Far away in North America, the sun rises over four homes as the people inside get ready to start a long, exciting journey. With tenderness and humor, this lyrical story tells how they are all brought together, and how they become four happy families on one very special day.

Elaine Aoki is the director of the Lower School at the Bush School in Seattle. The coeditor of Kaleidoscope, the National Council of Teachers of English, she and her husband live in Seattle, and this story is based on their experiences of becoming a family.

Meilo So, originally from Hong Kong is an award winning illustrator who lives in the Shetland Islands in the U.K. with her husband and their daughter.

Jean Davies Okimoto is the daughter of an adoptee and the recipient of numerous awards for books for children and adults. She and her husband live on Vashon Island in Washington state. 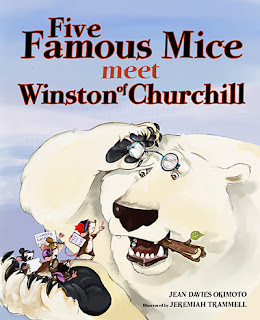 The mice are miffed... “All creatures are endangered! Not just polar bears!”

Rebuffed at Parliament, Nellie uses words of her famous namesake Nellie McClung to rally the mice. “We will pester them and pester them until they realize that we are creatures, too!”

But no one takes them seriously until Nellie leads the mice to Churchill, Manitoba where Winston, a famous polar bear, finds the five mice just can’t be ignored.

With a toast to Canada’s Famous Five, in this sequel to the award winning Winston of Churchill, Jean Davies Okimoto and Jeremiah Trammell again deliver a timely, heartwarming, and funny story about a very serious topic. 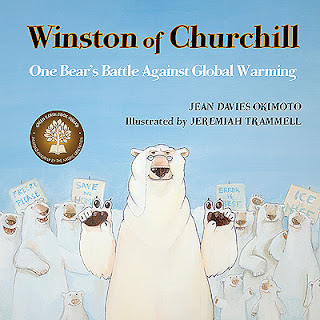 Churchill, Manitoba, the Polar Bear Capitol of the world, is the setting whereWinston of Churchill, a fierce, brave bear teaches the other bears about why the ice is melting. Jean Davies Okimoto and illustrator Jeremiah Trammell deliver a timely, heartwarming, and funny story about serious topic, and show us all that in the face of global warming, everyone must do their part, no matter how small.

“The threatened polar bears of Churchill—as well as children everywhere—will be delighted by Okimoto’s tale of Winston the bear’s fight for ice.” 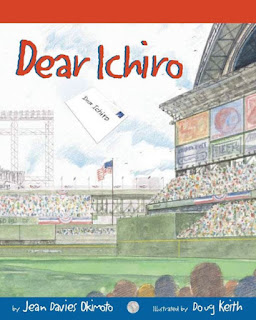 
Celebrating the diversity of baseball, Dear Ichiro is a warm, funny story that brings a universal message of healing and hope. Winner of the Children's Peace Book Award.

"Kindergarten-Grade 3-When Henry squabbles with his best friend, Oliver is sent home and Henry is absolutely convinced he will never play with him again. That afternoon, Henry's great-grandfather takes him to a Seattle Mariners baseball game. When team members Ichiro Suzuki and Kazuhiro Sasaki appear on the field, Grampa Charlie cheers along with the crowd. However, he also recalls fighting against the Japanese in World War II and marvels at the positive changes he could never have anticipated all those years ago. Henry applies his grandfather's thoughts about war and reconciliation to his friendship with Oliver and writes a letter to Suzuki sharing his grandfather's ideas. While the message of forgive and forget is the principal point of the story, it is delivered with innocent appeal. Brightly colored illustrations capture the boys' anger as well as the excitement of an afternoon at the ballpark. The introduction of actual baseball players adds authenticity, and notes provide a brief history of the emergence of baseball in Japan and the arrival of Japanese players on the American scene."
Alicia Eames, New York City Public Schools
Copyright 2003 Reed Business Information, Inc.." 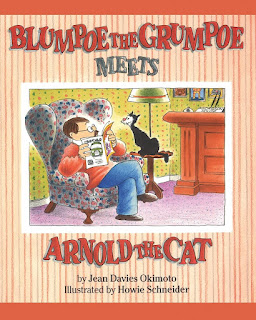 A grumpy old man and a shy young cat form an unlikely friendship at a Minnesota inn which provides its guests with a cat for the night. An engaging offbeat story made even funnier by Schneider's cheerful, cartoon-like illustrations.

"Ever since his dog Raymond died, grumpy Horace P. Blumpoe has become even grumpier. But even a grouch has a soft spot, and lonely Horace prepares for his annual visit to his sister Edith. When car problems force him to check in at the Anderson House Hotel, Horace is offered a cat for companionship during his stay. The cranky guest refuses, of course, but an endearing kitty named Arnold decides that Blumpoe needs feline attention, and sneaks into his room. A frantic nocturnal confrontation of wills ensues, with Arnold determined to lavish attention on Blumpoe and Blumpoe equally determined not to receive it (although Blumpoe's grumpiness finally dwindles, influenced perhaps by his companion's persuasive purring). The next morning Horace departs, but not before he asks a maid for the cat's name and makes some very specific reservations for his return trip. Okimoto's poignant story (based on a real hotel) is complemented by winsome, nostalgic illustrations. Arnold's seemingly boneless body and silly putty face convey a variety of emotions that will melt readers' hearts as surely as that of Horace P. Blumpoe."
—Publishers Weekly

Available on:
Retailers and Libraries: